Nina and I got tagged to cook the Seder for Passover this year.  I wanted to tackle the matzoh balls, since I’ve never made them and only ever eaten them once before.  I’ve been researching on the Internet and in Nina’s Jewish cookbooks for a matzoh ball recipe. All of them are very similar with the exception of a few variations:

I wanted to use schmaltz for the fat in this batch, but I didn’t save any chicken fat last time I was cutting birds. I stopped at the market and ask my favorite butcher at Giant on the way home from work.  Wouldn’t you know it?  You can buy it already rendered in little tubs!  Butter is not kosher in meat soup, but I need the flavor so I’m steering clear of the veg oil. 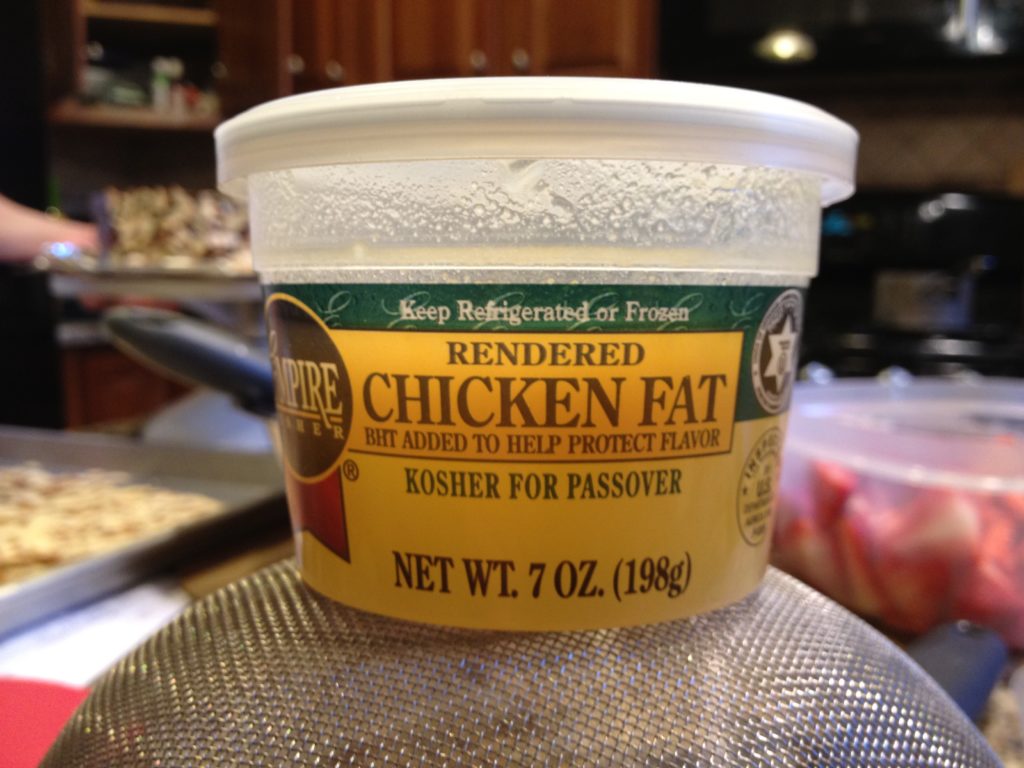 The difference between the matzoh ball mix and the matzoh meal is that the mix contains garlic and onion powders and a couple that I’ve looked at actually contain baking soda. Great idea for nice pillowy floaters but I thought leaveners were forbidden. I’m not convinced that 2 tablespoons of seltzer has enough gas potential to make anything pillowy.   I think that the baking soda also makes the balls a little too loose and they kind of deteriorate in the boiling liquid.  No baking soda, thanks.

I don’t think I want green bits in my matzoh balls, so I’ll keep the herbs in the soup.

I learned last night that it’s important to turn DOWN the heat once the balls are loaded into the boiling liquid. Keeping the liquid at that harsh boil destroys the outside of the balls and leaves you with some ugly units. 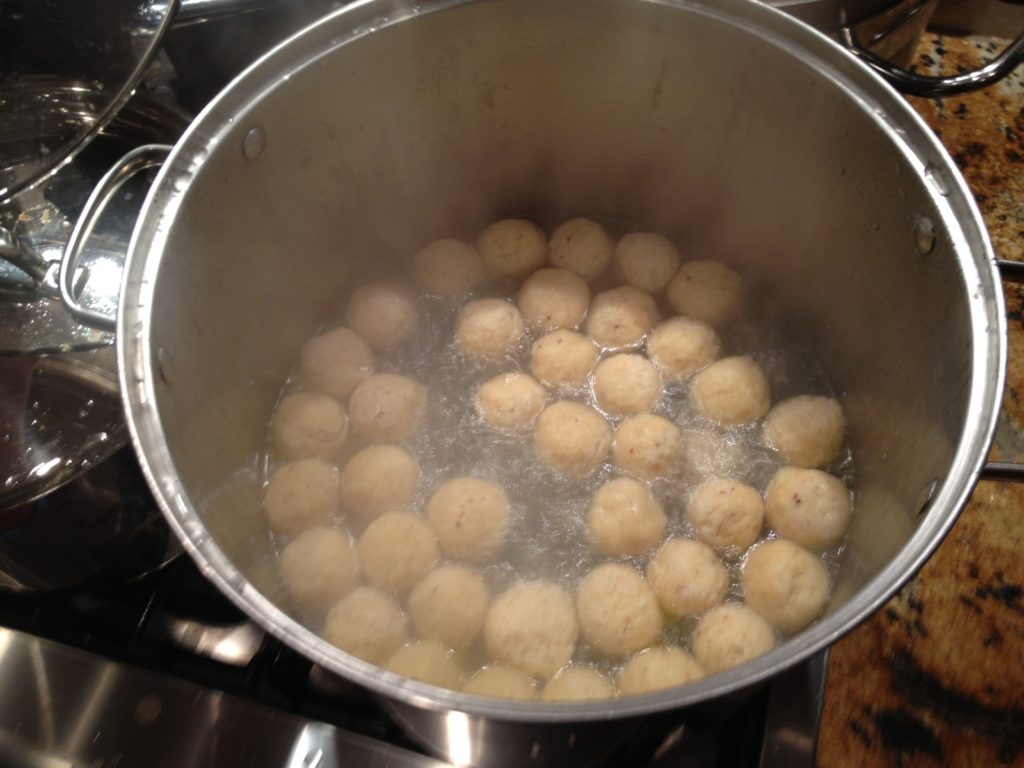 Cooking the balls in the chicken stock is preferred, but I’m making enough for 20, so I need to keep the broth clear. I’m hoping the schmaltz will give me the chicken flavor even though I’m boiling in water.  Don’t forget to put a couple of TBSPs of salt in the water so you don’t leech all the salt out of the balls.

Finally, a big thanks to Rachel, my official Matzoh-Ball-Taster-and-Judge. I’m doing this all for you!

In a small bowl, mix together the dry ingredients. In another bowl, use another fork to mix together the eggs and schmaltz.  Make sure the schmaltz isn’t too hot–you don’t want to cook the eggs, yet. Pour egg mixture into the dry ingredients, and mix together with a fork until just combined and stop futzing with it. Do not over mix. You should have a pretty loose batter at this point. Put mixture in the refrigerator and let it rest for half an hour. This will give the matzoh meal time to hydrate, soak up the moisture and firm up.

After about 20 minutes, put the pot of broth on the stove and bring to a rolling boil. Meanwhile, gently form the mixture into 1″ balls using wet hands and let stand on a wet plate. I like to use a 1″ disher to get the balls all the same size for even cooking. When the water is at a full boil, place the balls in the water and cut the heat to just a gentle simmer after a couple of minutes so the eggs have time to set up in the heat.  Let the balls simmer for 35 minutes and remove to waiting soup pot or a plate and let them come to room temperature before storing so they don’t fall apart.