I’m working on a recipe for fermented chickpea hummus. Ideally, I’d like to use raw chickpeas.  Raw foods rule!  Right?  Or do they?  Like other beans, raw chickpeas contain large amounts of lectin. Lectin is a protein that plants produce as a defense mechanism. When animals eat foods that contain a lot of lectins, they learn not to be so foolish in the future. Lectins cause the beans to be indigestible. Consuming legumes and grains in their raw form can even result in nausea, diarrhea, and vomiting. Researchers speculate that many apparent cases of bacterial food poisoning may actually be lectin poisoning.

But, there’s good news!  Lectins can be considerably reduced by soaking and cooking, usually boiling. Sound familiar? Yup, just like every other bean recipe: a long soak and then boil the daylights out of them.  I think that until I figure out a sure-fire method, I’m going to follow a long history of bean cooks and boil first, and then ferment the cooked beans.  Here’s the recipe: 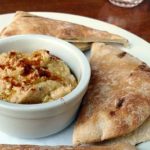 If you’re in a hurry, you can just give in and cook them. There are all sorts of methods for cooking dried beans. The worst method is to just dump the dry beans in a pot and boil. The coats on these little guys need softening before the beans will rehydrate and cook properly. I’ve compiled some different ways to accomplish this. First, start with a large pot. If you need 3 cups of chickpeas for your recipe, measure out 1 cup of dried beans. Add to that 3 cups of water. Now, depending on what else you’re doing choose one of the below methods:

Yes, the other lectin remedy is sprouting! Beans give up their lectin when they switch modes from self-preservation to reproduction. They become very vulnerable–just like us! Chickpeas can be sprouted like any other seed. Give them an overnight soak and then rinse them twice a day and leave them to drain. After a couple of days, they’ll be growing the cutest of little roots. That’s how you’ll know they’re ready for hummus.

Masontops just sent me some sample “Bean Screens.  They’re pretty awesome!  The little divot to fill actually is a brilliant idea!  The water goes right in.

PS  Interestingly enough, I found a study that says that not all lectins are created equally.  According to

“many lectins are non-toxic, such as those from tomatoes, lentils, peas, chickpeas, fava beans, and other common foods.”

No wonder my hummus wasn’t making me sick…