Binder!  Actually a salami binder failure.  I left out the binder in my salami recipe!  My salamis are not perfect, yet. They’re curing nicely–they have a nice taste and aroma. I’ve gotten the salt levels in check by switching over to a couple of grams of #2 cure instead of the ounces of Morton’s Tender Quick I was using. But now, I have a new problem. The salami isn’t holding together. The salami crumbles when cut. I need some kind of binder in my salami. 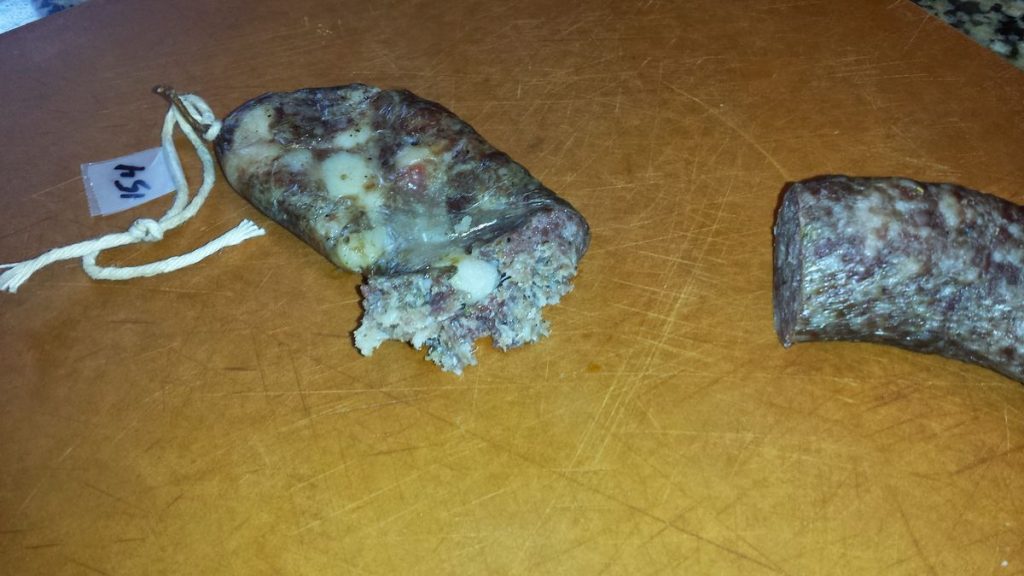 Going back through my recipe for my tiny salami I realized that I (intentionally) omitted the milk powder from the Ruhlman recipe. I’m lactose intolerant and I avoid unfermented milk. My beautiful wife pointed out that salami IS fermented and shouldn’t give me gastric distress. I eat yogurt and aged cheese everyday! Besides, turns out the milk powder is the recipe is not used as a food for the lactobactors, but instead, used as a binder for the salami! I thought about switching to Soy Protein Isolate or Concentrate but found too many nutritionists warning me that it’s evil. (Here and here)  SPI sounds scary.  So, let’s do it again–with milk powder.

Another change. Bigger casings. I got scolded on reddit.com/r/Charcuterie for using little casings for my fermented products. I was told to switch to a larger casing. The larger sausage takes longer to cure and therefore has more time to develop flavor. I bought some fibrous summer sausage casings on Butcher&Packer. These are 62mm.  See, guys?  I’m listening!!

Mix together the following: 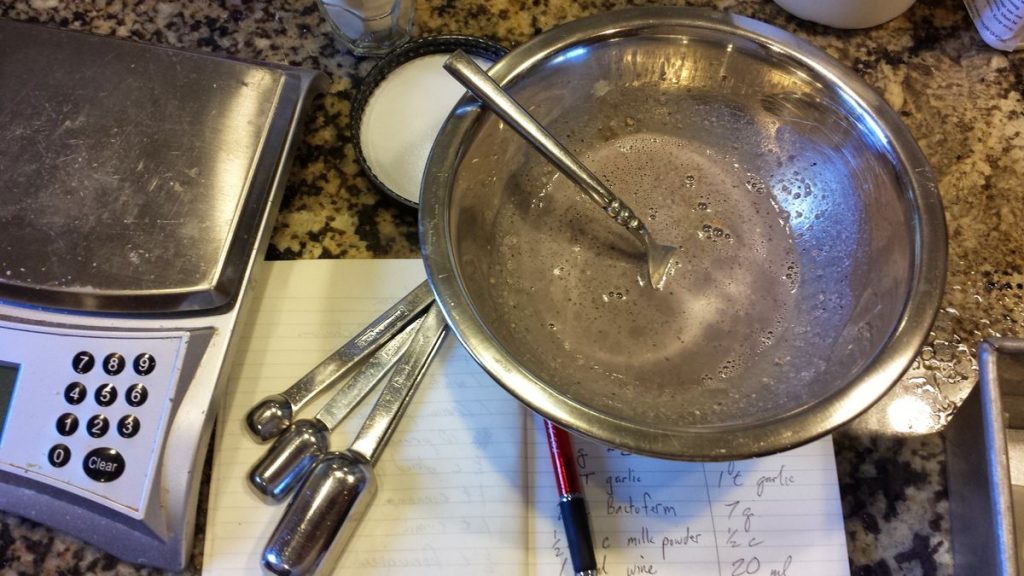 Mix in 30 oz ground sausage mix and stir well. Mom gave me some Breakfast sausage that she got from her butcher from the last pig. I didn’t feel like frying it for breakfast and it was super mild, so I thought it would be more fun to experiment with it. The Ruhlman recipe called for 5# of pork I had 30 oz, so I had to do a little math. 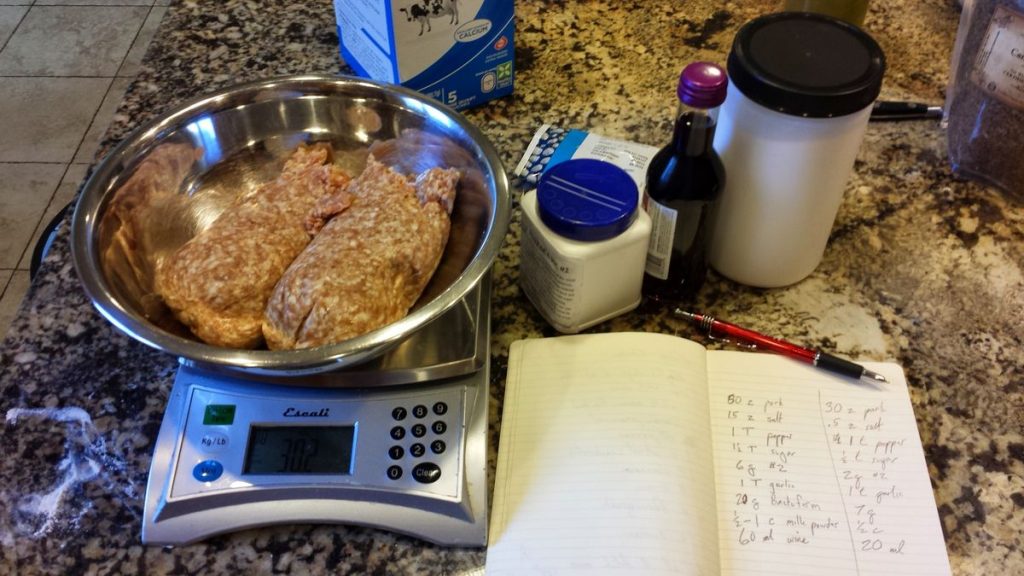 After making sure I had the cure / binder well incorporated, I packed the mix into a 62mm fibrous casing. 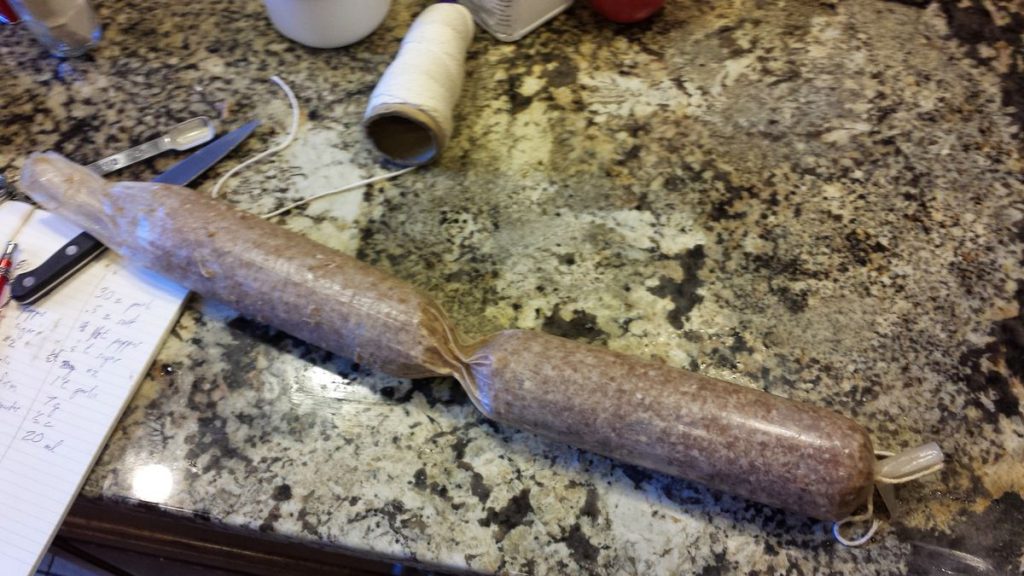 Sausisson Sec in a Summer Casing

I tied them off and gave the casings a good pricking. I weigh and label with a piece of tape folded in half over the string. 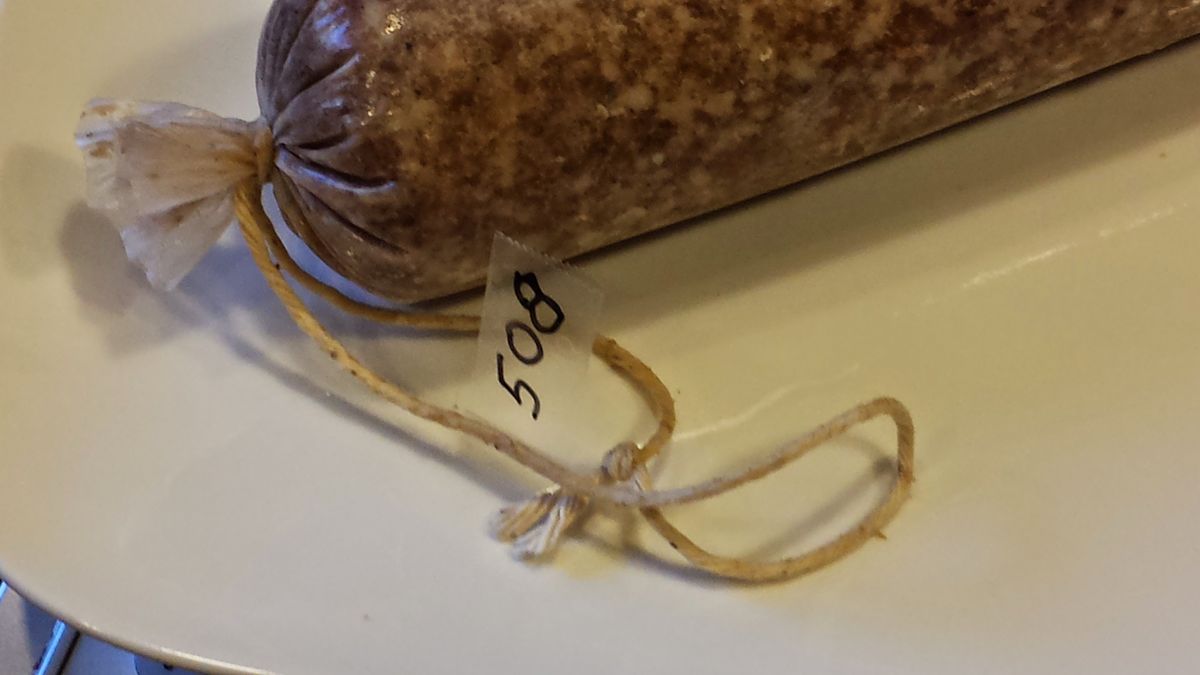 These will go into the cure box at 65° F and 70% RH for a couple of weeks until they are at 70% of their original weight.

It worked!  I weighed the salami hanging weight.  It was at 69.7% of the stuffing weight!  The salami itself seemed pretty firm, but still had some give.  So I cut into it.  Here’s what I found.  I think it might have hard-cased, a little.  There’s a decernable ring of drier meat on the outside.  Maybe It just needs to dry / age for a couple more weeks/months.  It’s very tasty.  Still seems a little salty, but I’m getting closer to edible.  A little less salt and a little more pricking. 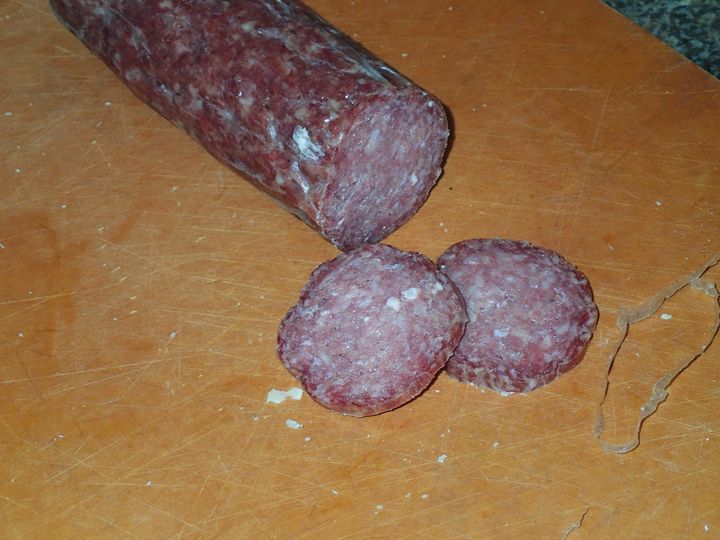