How to Make Oatmeal Bread

This is an oatmeal bread recipe that I found on the King Arthur Flour website. I’ve tinkered with the ingredients because that’s what I do AND because we weigh everything that gets baked in our house. It’s more efficient and it’s more accurate. I just put the mixing bowl on the scale, tare, and start tipping in the ingredients. If you’re trying to learn how to bake, do yourself a favor–buy a Scale. Spending time with measuring cups and measuring spoons takes a lot of time and it’s NOT precise. With a scale, you can just put the bowl on the scale, hit “tare”, add the flour, hit “tare”, add the oats, hit “tare” and just keep going. Sure, mise en place rules would have you weigh out each of your ingredients into separate bowls and then add them together. I don’t like to wash all those bowls. You decide.

I like this technique better than Alton Brown’s Leftover Oatmeal Bread recipe. I’ve tried actually preparing the oatmeal and then incorporating the mush into the bread ingredients, but it’s really an unnecessary step. I suppose he was trying to use up leftover oatmeal with his recipe. Or perhaps his idea was to create an oatmeal soaker to develop more oatmeal flavor. I am more interested in a simple recipe that I can do consistently. Rolled oats are soft enough for me without precooking. 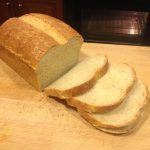 It’s best to let the loaves cool in a Bread Box overnight. From there, I like to put them in Forever Bread Bags. They’re inexpensive and they are a close cousin to Green Bags. Now, these green bags are the bomb! They’re like magic time capsules for produce! You can keep cilantro in the fridge in one of these green bags for a week! No kidding! I just wash them out and let them dry. They’re heavy-duty and only have to be replaced every six months or so! I can’t say enough about these green bags.